How to Know Whether the Ruby Gemstone is Real or Fake? 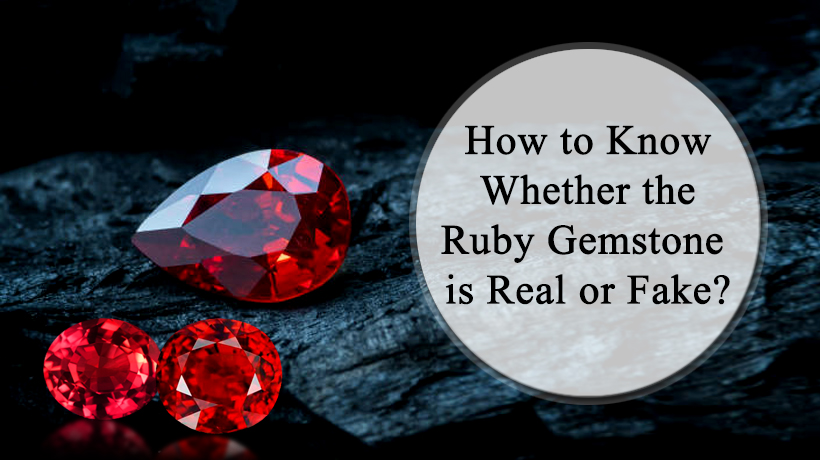 How to Know Whether the Ruby Gemstone is Real or Fake?

When buying any kind of loose gemstones, there always has been a question in everyone’s mind as to whether the gemstone is real or not. This question is quite valid because there is so much duplicity of various kinds of stones worldwide that a lot of people easily get fooled up and end up paying huge amounts of money for fake gemstones. Ruby is such a gemstone that is famous worldwide for its various properties but especially for its look. Naturally, it takes years for a ruby gemstone to be formed through various geological processes. However, as these naturally occurring ruby gemstones are quite expensive, people came out with synthetic ruby gemstone which is made in a lab and carries the same shape and properties as a real one but looks more perfect as it is carved in a lab than being processed naturally. It takes a few days to make synthetic ruby gemstone and thus, it is less expensive than a naturally occurring one. Though ruby is now available at a genuine price around the world, still there are sellers and people who create imitations of ruby gemstones that have no real property and are usually just carved stones made of a kind of glass. Hence, it becomes quite important to check and verify your ruby gemstone properly to recognize whether it is real or fake before you shop your favorite wholesale ruby gemstone.

Given below are a few tips that will help you distinguish between real and fake ruby gemstones.

Look for flaws in your ruby

The things that occur naturally always have some kinds of flaws in them. For example, if we just talk about naturally occurring ruby gemstones only, the shape of the gemstone cannot be always perfect, there would be some kind of flaw in it. There could also be various kinds of debris or other particles inside it which can only be seen with either a microscope or a good-quality magnifying glass. If your gemstone doesn’t have a flaw, it probably is a synthetic one, made in a lab, but that doesn’t make it fake. It can be considered fake if it makes air-like bubbles after a while, as it indicates the property of glass and not a gemstone.

Perform a scratch test to find the genuineness of the stone

Real ruby gemstone is kind of scratch resistant and it gets scratched only if it is scratched with a real diamond. However, if you scratch your ruby with a surface or with some coin etc. and it gets scratches, then it indicates that the ruby that you are carrying is probably glass and not an actual ruby.

Scratch test is always the best option to find whether the gemstone is real or not, but we can also perform a rub test. To perform this test, one has to rub its ruby on a smooth glassed like surface and make sure that the ruby doesn’t leave any color on the surface. If there is any color left behind on the surface, it indicates that the ruby isn’t real, as real rubies don’t leave any color behind when rubbed with a surface like glass. The only problem with this kind of testing is that one cannot be sure of the genuineness of the stone even if it doesn’t leave color behind while rubbing as one may have added some kind of material in the fake ruby for avoiding it to leave color on the surface while rubbing. However, as a quick test, you can definitely go for the rubbing tip followed by other tips as shared here.

Weight and price difference between real and fake ruby

Due to the properties of real ruby gemstone, finding the real and fake one can surely become easier as you can apply the properties of real ruby. For example, the natural ruby is dense in structure which makes it quite heavy in weight. On the contrary, the fake ones are generally made of glass and thus, they do not show heaviness in comparison of the real genuine rubies. The glass one will weigh lesser than a real ruby. In addition to it, the real ruby is expensive especially if it is a naturally occurring ruby. If you get to buy ruby at a minimal cost, chances are that it might be fake!

Compare the color and shine of your ruby

It is said that a real ruby looks way different than a fake one and one can easily determine which one is real or fake if both are kept in front at once. The real one has a different shine of red color and doesn’t look dull at all. The shine might be even the same throughout the real ruby and you wouldn’t have a dull look on a real ruby. However, if the color and shine are uneven in certain places, it indicates that the stone might not be real.

Even though the above ways of finding the genuineness of ruby are quite accurate, still if one wants to be accurate and wishes to shop the wholesale ruby gemstone in the most authentic way, he or she should consult an expert knowledgeable professional, or a jeweller who can determine whether the ruby is real or not. Using this way, one can be absolutely sure whether the stone that you are carrying is real or not. Expert professionals and jewellers use microscopes or other special instruments that can easily determine and distinguish between real and fake gemstones.

Nowadays the market is full of fake loose gemstones including rubies made of different types of materials. Hence, you need to be cautious while planning to shop for wholesale ruby gemstones. Even the gemstones including rubies are created in labs through a synthetic process. People have come out with such good quality fake rubies that it is almost impossible for the naked eye to determine which is fake and which is real. However, considering the properties of real ruby and performing the above tests one can easily determine the genuineness of the stone. In addition to it, one can buy ruby from a reputed website or retailer that deals in real gemstones only.

Rashi Ratan Bhagya is the most authentic, trusted, and genuine online destination to shop real ruby gemstones and all types of loose gemstones. It has won the trust of its customers worldwide by providing them with natural original loose gemstones. Everyone knows that one will get the desired benefits of wearing ruby gemstone only if it is real. RRB (Rashi Ratan Bhagya) makes sure that its customers get only premium quality natural rubies. All the gemstones available at this destination are 100% real, natural, and government certified, and thus, you can stay absolutely content and happy while you buy real rubies from RRB.